For a group of former and current Girl Scouts, the bonds they developed and nurtured over the years have led to lasting friendships. Known as the Forget-Me-Not Breakfast Group, these Anchorage-based women meet once a month to chat and reminisce. 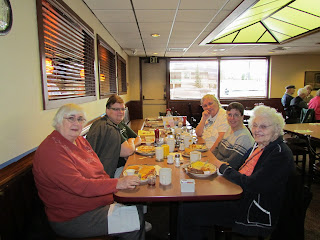 The group was started by former GSAK (then Girl Scouts Susitna Council) Executive Director Marjorie Bailey upon her retirement in 1982. There are currently 20-plus members, "though not all the members come to every meeting - every time we meet, the group is different," member Janice Baber said.

Benita is an original member of the group. She arrived in Alaska in 1954 and served as council president 1980-1984. Cheryl is a second generation Alaskan Girl Scout, having been a Girl Scout herself and later a troop leader with her mother. Cheryl's daughter, now grown, was also involved. "I started dropping in on the Forget-Me-Not group with my mom, and then I started coming on my own. These are all good people; there's not a bad one in the group. Since my mom passed away, these women have become like mothers to me," Cheryl said.

Micki leads a Cadette troop in Anchorage. "I'm involved, my daughter was a Girl Scout and now leads a troop in Barrow, and my granddaughter is involved. That's three generations," Micki said. "My husband was even a registered member. For us, Girl Scouts has been something we can do as a family."

Joy's Girl Scout experience was also a family affair. Her father and husband were both members, and her daughter was a Girl Scout. In the early 1990s, Joy and her family were transferred to a military base in Germany where Joy led a troop of Brownies and Juniors. She also served as a Girl Scout trainer and age level consultant. "It was a different world," Joy said. "We didn't do cookie pre-sales, for instance - you just had to guess how many boxes you might need. Amazingly, we always managed to order the correct number of boxes!"

Joy's travels have taken her to two of the four Girl Scout world centers: Pax Lodge in Hampstead Village, England, and Our Chalet in Adelboden, Switzerland. (The other two world centers are in Cuernavaca, Mexico, and Pune, India.)

Cheryl, Micki, and Joy were all involved in Girl Scouts growing up and earned the organization's highest achievement. (The highest achievement is currently called the Girl Scout Gold Award, but it has been known in the past as the Golden Eaglet, Curved Bar, and First Class.) Unlike these three women, Janice was not a Girl Scout growing up. "I was actually recruited as an adult by another troop leader in Arizona. My son was always a tag along to Girl Scout events, which got him interested in Boy Scouts. I didn't have a daughter, but it was fun to be involved on my own," Janice said.

Janice has attended every Encampment in Girl Scouts of Alaska history. She is known for leading "TLC" and "Craft Cash" activities. "I've made so many friendships in Girl Scouts," Janice said. "The Forget-Me-Not group is a way of ensuring those friendships last."

The Forget-Me-Not Breakfast Group meets the third Saturday of the month at Denny's Restaurant, 3850 DeBarr Road, Anchorage. For information or to get involved, contact Janice Baber at wf5f@aol.com.