A shared love of adventure, song, and the great outdoors created an indelible bond between former Girl Scout camp counselors at Camp Chalk Hills in White Rapids, Wisconsin. Some of the women have been friends nearly half a century, meeting every four years to reconnect and reminisce. Three members currently live in Alaska. CC Travers, who resides in Juneau and volunteers with GSAK, says Girl Scouts "has made me who I am today." CC even met her husband of 26 years while on a Girl Scout international opportunity in Australia!

The group calls itself GROG, which stands for the “Gathering of the Royal Order of the Green.” Since the women share memories of the same camp, many of the relationships cross generational boundaries. Mary Julia Knox – or “Stringbean” to her fellow counselors – credits Anne Bishop (“Annie B.”), a retired professional Girl Scout and former director at Camp Chalk Hills, with creating a camp atmosphere that fostered lasting friendships. 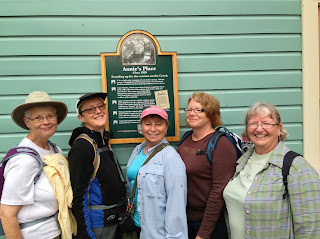 "Annie's Girls" outside Annie's Place in Ketchikan. "Stringbean" is second from left.

“Annie B. really instilled in us the Girl Scout ideals, particularly ‘be a sister to every Girl Scout.’ We've shared so much over the years. These women feel more like sisters than friends,” Mary said. 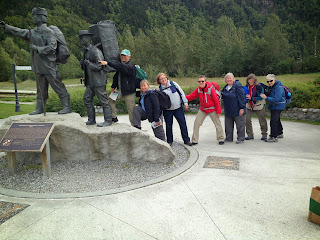 The group traveled to Ketchikan, Juneau, Skagway, Fairbanks and Denali National Park, Anchorage, and the Kenai Peninsula. The women shopped, talked, dined, and most importantly, sang. “That was part of the bond that Annie B. created, the singing,” Mary said. “We would sing after we put the kids to bed, often until it was time for us to go to bed. That’s what we still do when we’re together. We sing.” 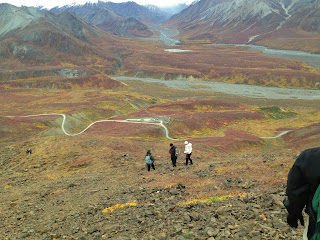 CC, or "Ceesco," is a mother of three and a high-school math teacher. She credits Girl Scouts with "contribut[ing] to my professional development and teaching me how to be a leader and giving me lots of experience working with kids.

"Of the group that came to Alaska, I really only knew one of them... But that didn't matter. They were GROG... We feel like we know each other because we have the same common experience and common values even though we don't know each other. It really makes the 'sister to every Girl Scout' ring true. Eight of them stayed at my house for the weekend, and we had a great time."

CC's two daughters are involved with Girl Scouts of Alaska in Juneau, one as a Senior and one as a Cadette. CC is co-leader of her daughter's Cadette troop. When the troop attended Encampment at Camp Togowoods last summer, CC was struck by "how wonderful and amazing to me how similar Girl Scout camps are... So much fun to remember and tell how awesome my Girl Scout experiences were and still are!"

In addition to travels far afield, the group hosts “mini-GROGs” throughout the year. Recent mini-GROGs include a leaf-raking event, marching together in a Fourth of July parade, and a weekend at Mary’s lake house this summer.
Email Post