It seems only natural Kayla Bowdoin would pursue a career in the construction industry. As a child, she spent the majority of her free time camping, fishing, and exploring the Alaska wilderness. Kayla belonged to a Girl Scout troop in Ketchikan as a young teen, which further solidified her love of the great outdoors.

In high school, Kayla decided to pursue a career as a welder. She enrolled with the Alaska Job Corps upon graduation, but the welding program was full. She took CISCO courses instead, “but computers never really felt right. I wanted to be outside building things. I was very hands-on as a kid; making models was a favorite hobby. Working in construction is like creating models, but on a much bigger scale.” 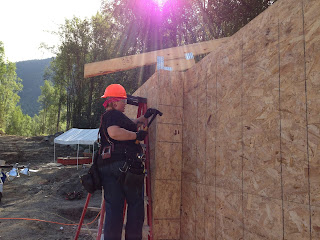 Kayla bounced around the Lower 48 awhile, uncertain what to do career-wise before her mother intervened. An office administrator with the Southern Alaska Carpenters Training Center, “my mom said, ‘You know, you should really check out the apprenticeship program. It might be good for you.’”

Kayla now works for the International Brotherhood of Carpenters and Joiners of America as a pile driver. Currently, she is helping construct the new lodge at Camp Singing Hills. The 6,500-square-foot lodge will be outfitted to offer state-of-the-art science, technology, engineering, math (STEM) programs, and a variety of other Girl Scout programs and adult training. It will also have a sleeping loft, a commercial kitchen, restrooms and showers, and storage space for canoes, kayaks, and other items.

Cornerstone General Contractors serves as the general contractor for the Camp Singing Hills project. Cornerstone collaborated with the carpenters union to provide labor. Kayla and her fellow employees will work to complete the exterior of the lodge this summer. The interior will be finished by the end of 2014. 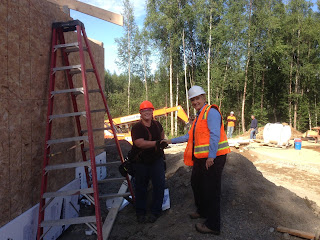 Kayla with Sue Perles, CEO of Girl Scouts of Alaska

Being a woman in the male-dominated Alaska construction industry isn't always easy, Kayla said, but the values Girl Scouts instilled in her have helped her meet those challenges head on. “I grew up in a household where I was taught to have kindness and respect for others, and my dad drove home the importance of a strong work ethic,” Kayla said. “Girl Scouts teaches you to be independent, but to ask for help when you need it. I learned that if you don’t work in cooperation while pulling your weight, the whole project can fall apart.”

This is certainly true in construction, where completing a project on time and within budget requires teamwork from all participants. Pile drivers lay out, cut, splice, and drive wood, metal, or concrete piling embedded into the ground for purposes of supporting a load or compacting soil. It’s physically taxing work that often requires more than one set of hands.

Kayla said her experience working at Singing Hills has been a good one. “As a woman, it’s tough – you’re working in a man’s world. It’s only over the last 20 or 30 years that men have started seeing women in the hard-labor jobs. The mentality of ‘Women should be at home cooking and cleaning and having kids’ is still around, but I really haven’t gotten any of that at Singing Hills. Everyone is nice; they’re not complaining, because I’m showing up and getting things done.”

As for the future, Kayla wants to keep working in construction. “I come home covered with dirt and bruises, but I do enjoy it. At the end of the day, I can point to a finished project and say, ‘I helped build that.’ I want to keep working and doing what I’m doing as long as I can.”
Email Post