Out of Their Comfort Zone and into the Spotlight

This afternoon in Houston we honored the ten national Girl Scout Young Women of Distinction and had the chance to hear each of them give courageous, confident, and inspiring speeches.

Some of the girl's speeches were so moving, they had me in tears.

A common thread among almost all the girls' speeches was the fact that they had stepped out of their comfort zone and done things they'd never done before in order to achieve their Gold Awards.

First on the stage was Darragh Friedman, who made a film documenting the testimonies of five Holocaust survivors.  In her acceptance speech, she noted that making the film gave her an appreciation for the gift of life. 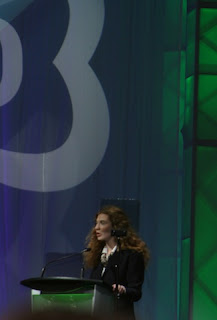 Megan Johnson was born with a facial disfiguration and felt compassion for others in her community who were looked down upon for being different.  Her Gold Award project involved working with prisoners to make blankets, socks, and hats for Seattle's homeless community. Megan's advice to girls was simple yet powerful:  "Be kind, be persistent."

Brianna Hutchinson noticed that local community events existed to raise awareness about cancer and other health conditions, but there were no events focused on child abuse awareness.  Her Gold Award project involved organizing a "Walk for Hope," which has since become an annual event.

Brianna credited her success to the help and involvement of many others in her community.  She noted that "leadership works best when it is a shared, cooperative experience."

To read more about these and the rest of the accomplished Young Women of Distinction, click here.

Here's the whole group on stage receiving their awards and hugs. 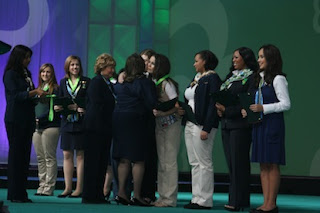 I can't wait for Alaska's own Young Women of Distinction recognition event -- a luncheon on March 29, 2012 where we'll honor Gold Award recipients in our own Council, and celebrate the accomplishments of Alaska's amazing girls.  Save the date!