KODIAK, ALASKA — Girl Scout Cadette Krista Simpler earned a national distinction for her lifesaving efforts during a home emergency. After her father suffered from a laceration and severe bleeding, Krista calmly provided medical care and assisted in saving her father’s life.

For her courageous efforts, she earned a Medal of Honor, one of Girl Scouts of the USA’s Lifesaving Awards, which she received during a presentation during Kodiak Women of Science STEM Day at Kodiak College on March 4, 2017. Girl Scouts of Alaska CEO Sue Perles and Kodiak Chief of Police Ronda Wallace presented Krista with the Medal of Honor as her Girl Scout sisters looked on from the crowd. Krista also received a signed letter of congratulations from Girl Scouts USA CEO Sylvia Acevedo.

Krista’s father, Brett Simpler, said his daughter sprang into action after a dish fell from the cabinet, shattered, and sliced his wrist at their home earlier this year. Krista immediately called her mother. When there was no answer, she contacted her grandmother who headed to their home on-foot. Meanwhile, Krista helped her father dress, rinse the laceration, and replace paper towels as they attempted to stop the bleeding. Due to the amount of blood loss, Brett decided a hospital visit was necessary and was met outside of their home by Krista’s grandmother, who had hurried over after Krista’s call. 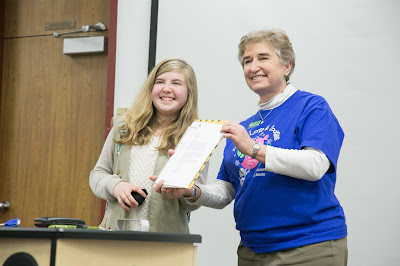 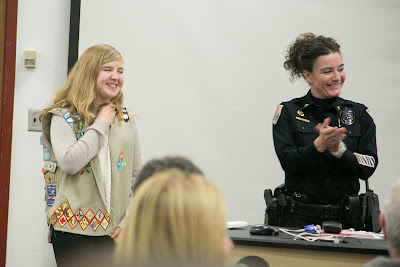 When asked what was going through her mind at the time, Krista said her sister was frantic and her dad was in shock so she had to act. “I tried my best even though my hands were shaking when I called my mom, who didn’t answer,” she said. “I had learned from first aid training, Girl Scout training, and my dad himself that during emergencies it’s important to stay calm.”

Krista said she was honored to earn the Medal of Honor and be recognized at the presentation, highlighting  the special experience of receiving the Medal of Honor in front of other Girl Scouts. “It felt nice because I always looked up to older girls when I was younger,” Krista said. “When I was a Daisy and Brownie, I always said, ‘I want to be like them,’ so it was nice that I got to be a role model for all of the younger girls. I was slightly nervous but I was mainly excited to be receiving the award.” Looking back at it all, Krista said her actions have confirmed an important lesson. “It makes me feel that in the future, I have enough knowledge and experience to handle any situation. I just don’t need to be a bystander.” 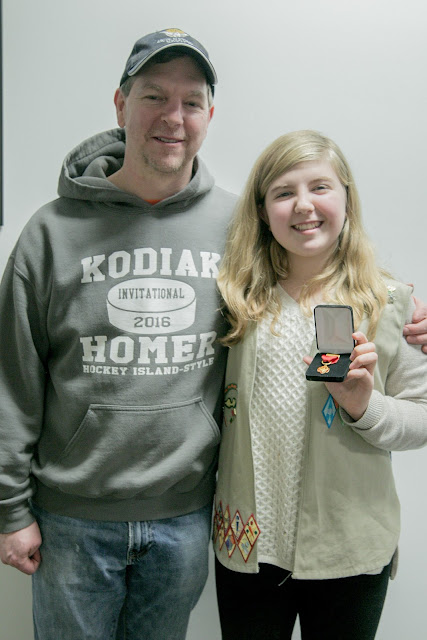 Brett received care at the hospital following the emergency and is doing well. He prides his daughter on the way she handled the scary situation. “We have always known her to be a confident girl,” Brett said. “She is a pretty remarkable young lady and was able to remain calm. It was neat that she was there for me. It was not a nice situation to be in and I am really proud of her that she was there to help me out.” 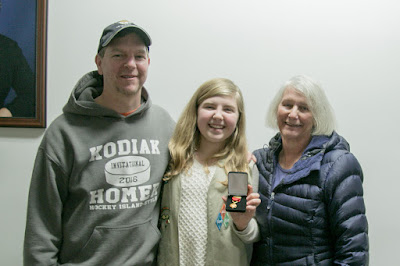 The pride extends beyond her own family to that of the Girl Scout family. “We are extremely proud of the courage Krista showed as she administered lifesaving efforts during a home emergency,” GSAK CEO Sue Perles said. “It was an honor to present Krista with the Medal of Honor during Kodiak Women of Science STEM Day. Her example empowers girls to have confidence and take the lead in a variety of scenarios. Girls learn lifelong skills through Girl Scouts, and Krista showed how these skills continue to guide girls’ actions throughout life. We’re proud of you, Krista. Congratulations!”

Lifesaving Awards are national awards earned by a registered Girl Scout who has saved or attempted to save human life under circumstances that indicate heroism or risk of her own life. Girl Scouts can earn the following Lifesaving Awards: The Bronze Cross, presented when a girl had shown special heroism or had faced extraordinary risk of her own life to save another’s life, and the Medal of Honor, presented for gallantry with considerable risk to a girl’s life.

Of the 1.9 million nationally registered Girl Scouts, only 33 Lifesaving Awards have been awarded this year, and 37 were awarded in 2015. Krista will also be honored at Encampment 2017 this summer.

Congratulations, Krista. We are so proud of you!
Email Post