Alaska's dry summer has led to one of the worst wildfire seasons on record, with 4.5 million acres burned as of July 13. The Mat-Su Sockeye Fire and Kenai Peninsula Card Street Fire led to a host of evacuations, with many properties and structures damaged or destroyed. As always, when disasters occur, Girl Scouts young and old are at the ready!

For "outstanding support and professionalism" during the Mat-Su Sockeye Fire, GSAK received a Certificate of Appreciation from the Alaska Incident Management Team, an organization that provides response to complex emergency incidents. 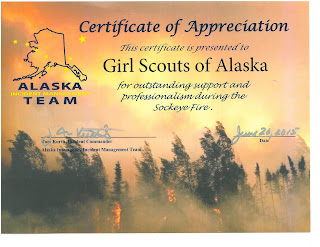 "At first I only gave cookies to the shelters, but when I gave some to the Red Cross staff they were so grateful and happy," Mat-Su Member Services & Program Specialist Emily Tiller said. "In that moment, I realized we needed to go further than just the survivors. We are all in this together." 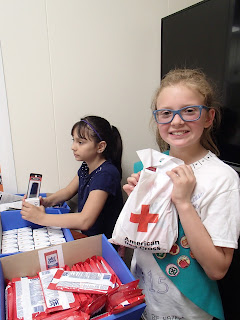 Emily came to GSAK in the spring of 2015 from the Department of Homeland Security: Federal Emergency Management Agency (FEMA) where she worked to support flood survivors and volunteers as they helped to rebuild eight rural Alaska communities adversely affected by 2013 Alaska flood. Emily also formerly worked for the American Red Cross of Alaska.

Emily's experience and procedural advice proved invaluable during not only the Sockeye Fire but to the Kenai Peninsula Girl Scouts when, several days later, the Card Street and several other area fires forced evacuations on the Peninsula.

A big thank you to Emily, our girls and adult volunteers who collected items and assembled the kits, all those who donated items, and the folks at J&J Independent Living for providing a space for donation drop-offs and kit assembly.

Like their Mat-Su neighbors to the north, Kenai Peninsula Girl Scouts channeled their leadership skills into helping their neighbors in times of disaster. In addition to assembling 50 comfort kits, girls stood outside Safeway grocery store in Soldotna and collected $560 in cash donations and three carts of food for evacuees and firefighters. 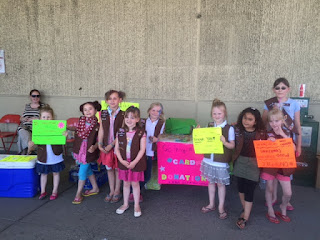 "These fires have really driven home for me the importance of Firewise," Kenai Peninsula Member Services & Program Specialist Billeen Carlson said. Firewise is a cooperative effort among local, state, federal and private agencies and organizations to promote fire safety in the wildland/urban interface. When adequately prepared, a house can withstand a wildland fire without the intervention of the fire service.

"It's great to see Girl Scouts actively seeking roles to assist their communities in times of need," Billeen said. "After all, helping girls become leaders in their own lives while preparing them for future leadership roles is what the Girl Scout Leadership Experience is all about!"

Thank you to Safeway, Northwest Customs for serving as a donation drop-off center, Soldotna United Methodist Church for providing a space to assemble the kits, and Sterling Community Center for distributing the kits. Kudos also to Billeen, our girls and adult volunteers, and all those who donated items.
Email Post