2015 Encampment Draws Girls, Adult Volunteers from Across the State

Learning and leadership, fun and friendship were the hallmarks of 2015 Encampment, held June 4-7 at the Alaska State Fairgrounds in Palmer.

After troop arrival and check-in Thursday, the girls gathered for the Parade of Troops. Bag pipers from Alaska Celtic Pipes and Drums led the parade. Girls carried banners with their city and troop number, wore costumes, and heralded their arrival with noisemakers. 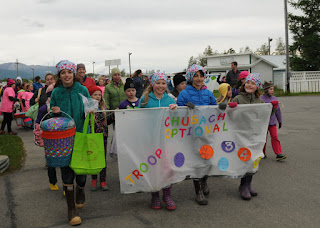 Afterward troops gathered for the official 2015 Encampment photo and opening ceremonies, which included addresses from GSUSA Board President Kathy Hopinka Hannan; Katie Nitzberg, a geologist with BP Alaska; and Lynda Zaugg, first vice chair of GSAK's board of directors. Kharissa C. from Palmer and Jordan C. from Juneau served as our event emcees. 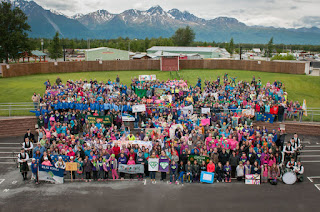 Friday and Saturday morning and afternoon were dedicated to workshops. Digital photography, dog mushing, belly dance, and basket weaving - this year's Encampment workshops spanned a range of topics including sports and recreation, music and drama, arts and crafts, and STEM.

"My favorite activity... It's hard to choose between 'Improve Your Improv' - because improv and acting [are some] of my favorite things to do - and photography," Sabrina A. of Troop 124 told Coastal Television Your Alaska Link reporter Caroline Flynn.

Click here to see Caroline's news piece, which was put together with the help of some potential future journalists!

In between workshop sessions girls could rock climb, tackle a bouncy-house obstacle course, enjoy some "me" time, or sit for face painting. 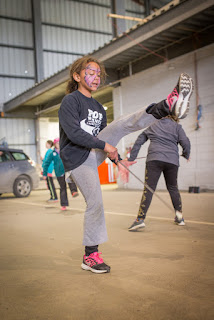 Along with her husband Allen Moore, who is also a champion musher, Aliy owns 40 dogs and runs SP Kennel in Two Rivers, a town 25 miles northeast of Fairbanks.

The theme of 2015 Encampment was "Superheroes in the Making," and Aliy told the girls that her superpower is to "keep smiling throughout all of the incredible challenges in life."

Aliy said 2015 Encampment was one of the best motivational presentations she has ever given. To quote Aliy when she returned home: “I went to to 2015 Girl Scout Encampment to try and inspire and encourage those girls, and I left the fairgrounds more motivated and inspired than I have been in years!”

Five lucky troops were randomly selected to attend a meet-and-greet with Aliy before her presentation. All the girls received a signed photograph of Aliy with her sled dog Junior. 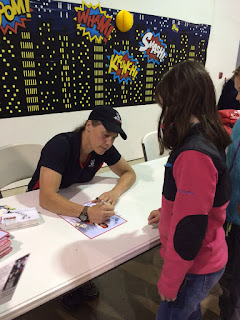 After another day of workshops, Saturday ended with closing ceremonies. The girls heard from U.S. Senator Lisa Murkowski, who had been a Girl Scout growing up in Ketchikan and serves as a member of the honorary Congressional Girl Scout troop called Troop Capitol Hill. Senator Murkowski addressed the girls via video:

"We all know that superheroes have superpowers. So when you think about that, where does your superpower come from? I'd say that my superpower is being at my best when I push myself out of my comfort zone," Senator Murkowski said.

"Those who are familiar with sailing know that you can sail pretty close to the shore to get to your destination, but risking the open seas and the rough waters will allow you to stretch yourself and help you find out what you're made of. You still get to the same place, but the adventures you have along the way? They're really worth it."

After closing remarks from GSAK CEO Sue Perles and Encampment Coordinator Tasha Nichols, the girls sang karaoke and danced the night away. 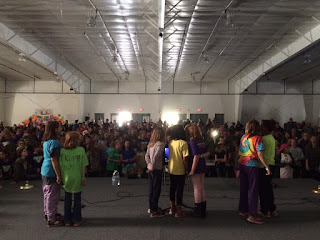 A big thank you to our girls and troop leaders, adult volunteers, workshop presenters, special guests, and the GSAK staff for making 2015 Encampment a success!
Email Post