Girl Scouts has been active in Southeast Alaska since 1968, when the Tongass Alaska Girl Scout Council received its charter from Girl Scouts of the USA.

Girl Scouts of Alaska currently serves nearly 1,000 girls in Southeast Alaska. Our jurisdiction includes the cities of Juneau, Sitka, Ketchikan, and Petersburg, and smaller communities such as Angoon, Craig, Kake, and Skagway, among many others.

A can't-miss event that supports Girl Scouting in Southeast Alaska, GSAK's 23rd Annual Southeast Auction was held January 31 in Juneau. This year's auction featured a silent and outcry auction and, as always, a dessert auction. More than 120 attendees turned out for this festive event. 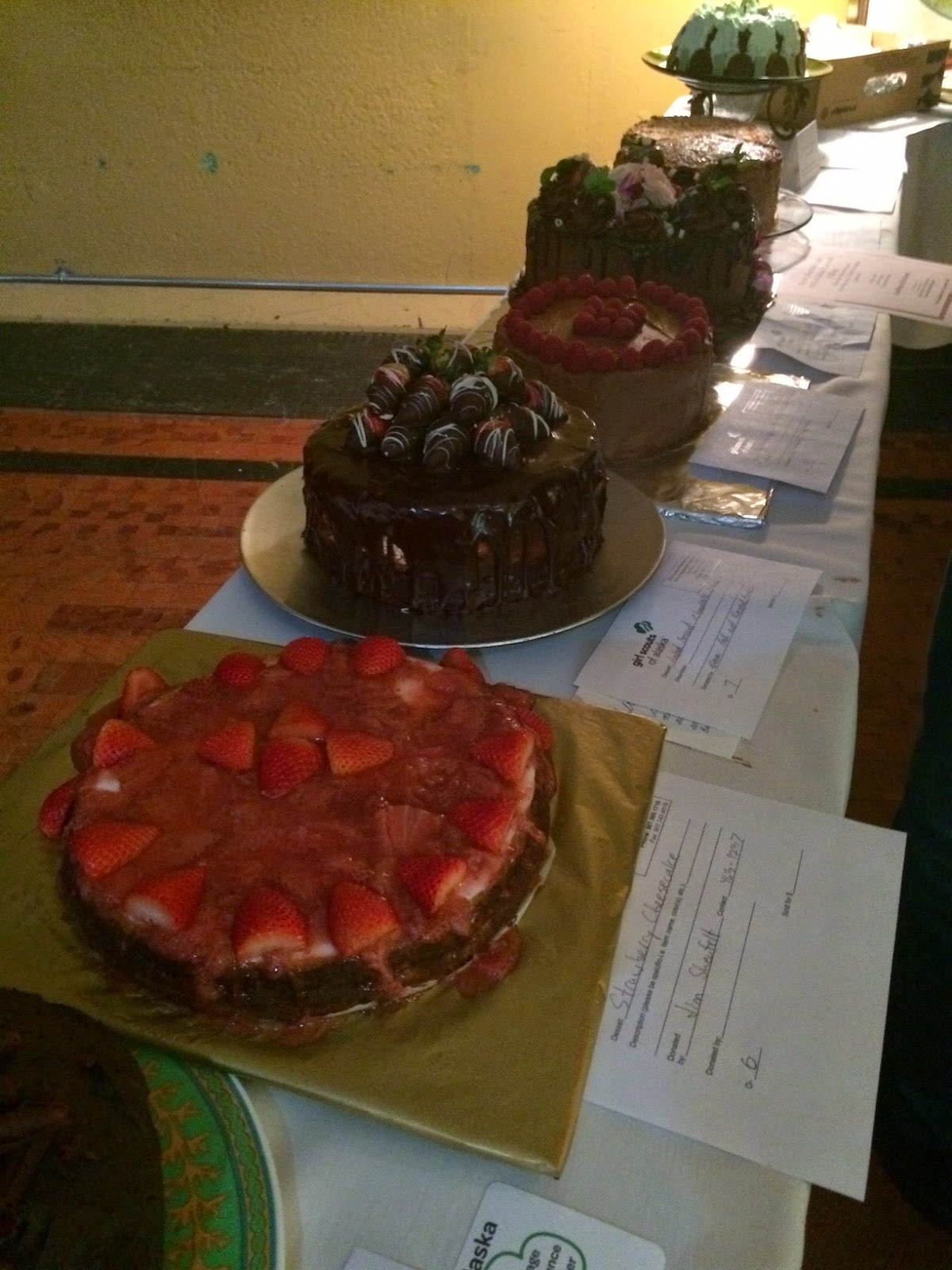 GSAK CEO Sue Perles arrived in Juneau on Wednesday so she could attend an ice-skating party at the Treadwell Ice Arena in Douglas. More than 75 girls, parents, friends, and volunteers turned out for the event, which was organized by Member Services & Program Specialist Taralee Ellis.

On Thursday, girls from several Juneau troops led the Troop 49 meeting. Troop 49 is an honorary troop comprised of Alaska's first lady, the lieutenant governor's wife, and our female state commissioners and legislators. 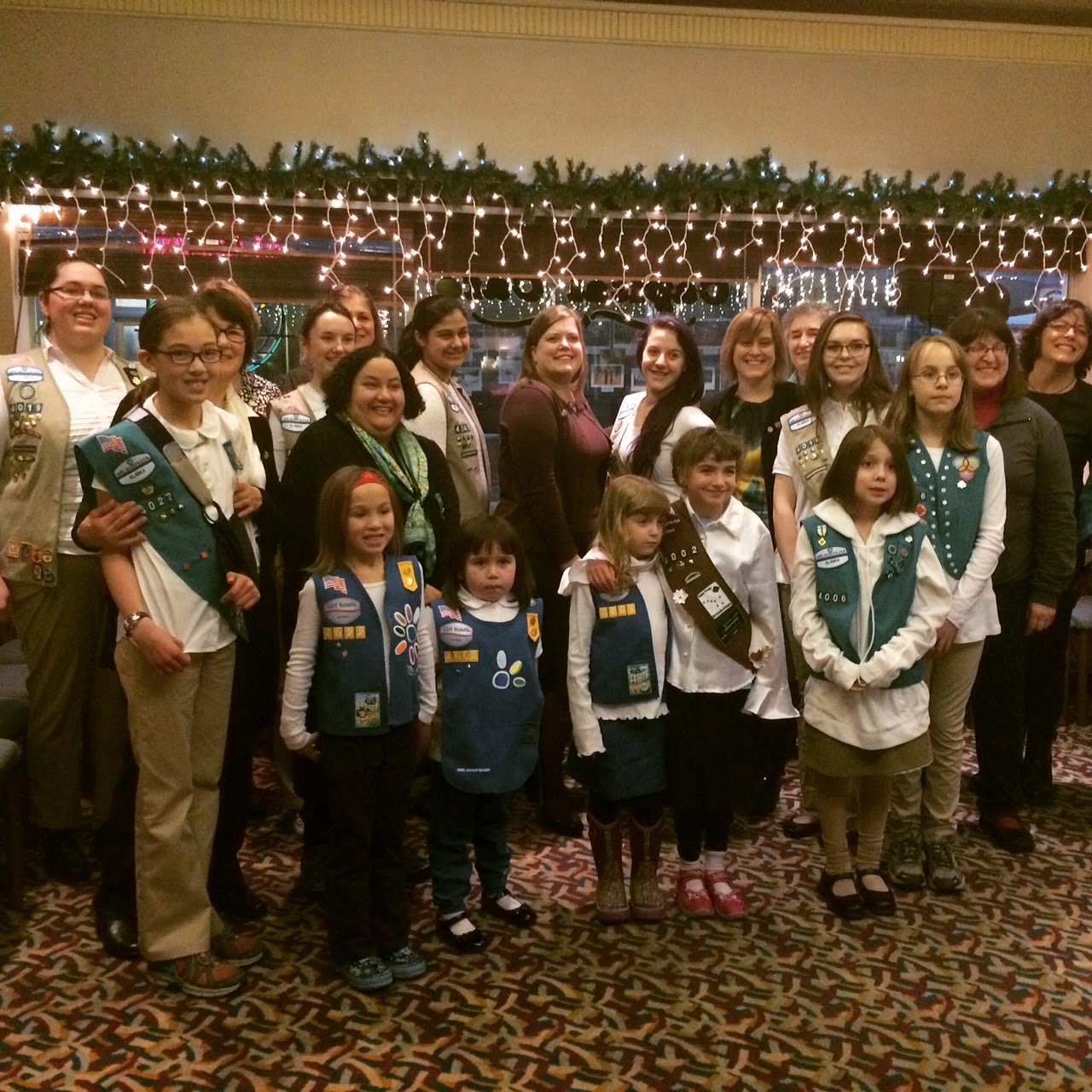 The girls led the women in the Girl Scout Promise and Law, and conducted a pinning ceremony. Toni Mallott, lieutenant governor Byron Mallott's wife, was pinned by her granddaughters, who are active in Girl Scouts in Juneau. Rep. Geran Tarr and Sen. Mia Costello will serve as leaders of this year's Troop 49. Sen. Costello is a lifetime Girl Scout. 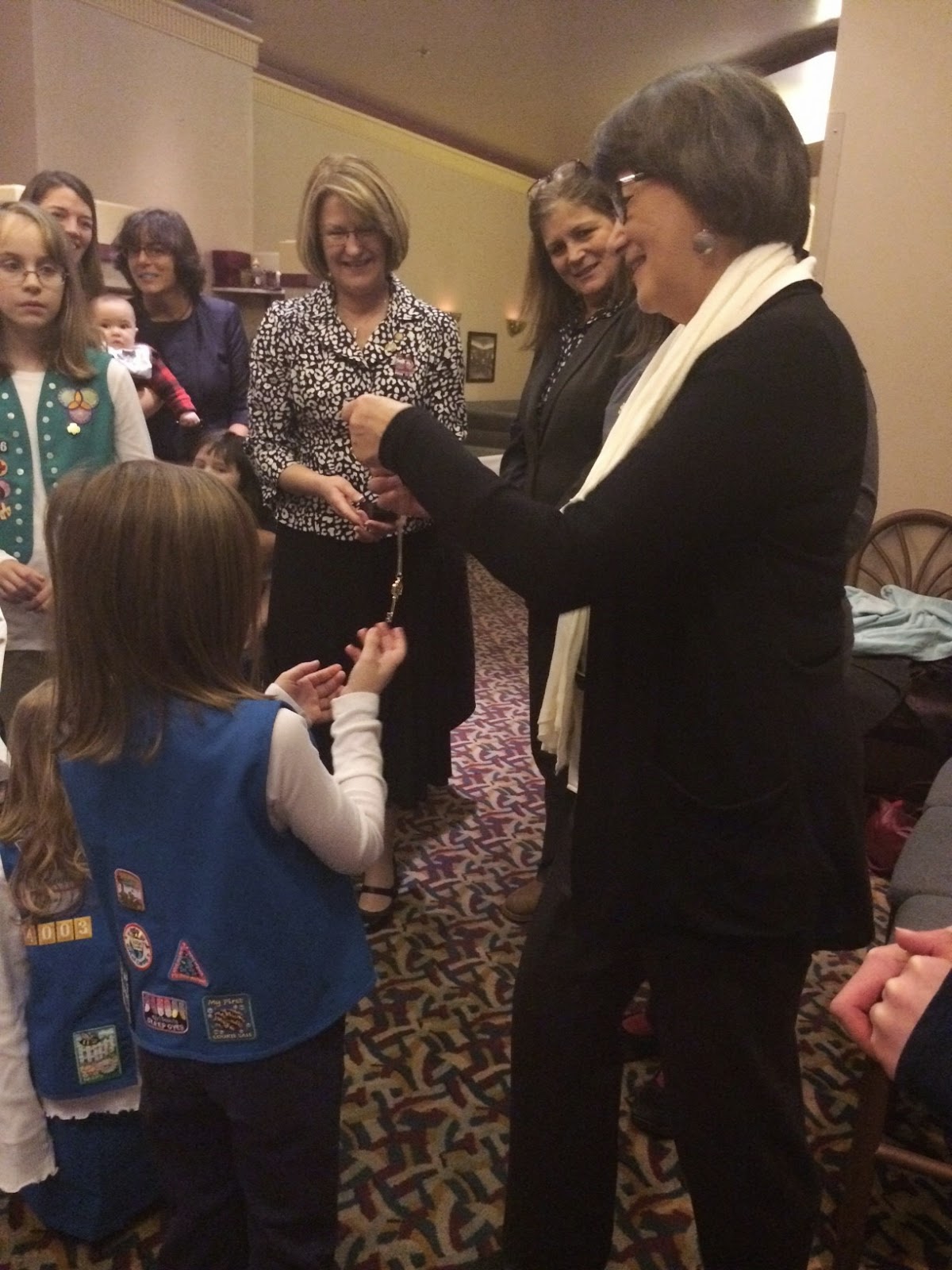 Toni Mallott receives her pin at the Troop 49 meeting while
Sen. Anna Fairclough and GSAK Board President Mary Siroky look on

On Friday, Sue was busy meeting with legislators, reviewing Girl Scout activities, and discussing future projects. The highlight of her schedule was a sign dedication ceremony at GSAK's Juneau field office. A beautiful new Girl Scouts of Alaska sign will hang alongside the Tongass Council sign to commemorate the 2009 merging of the Tongass and Susitna Councils to create Girl Scouts of Alaska. 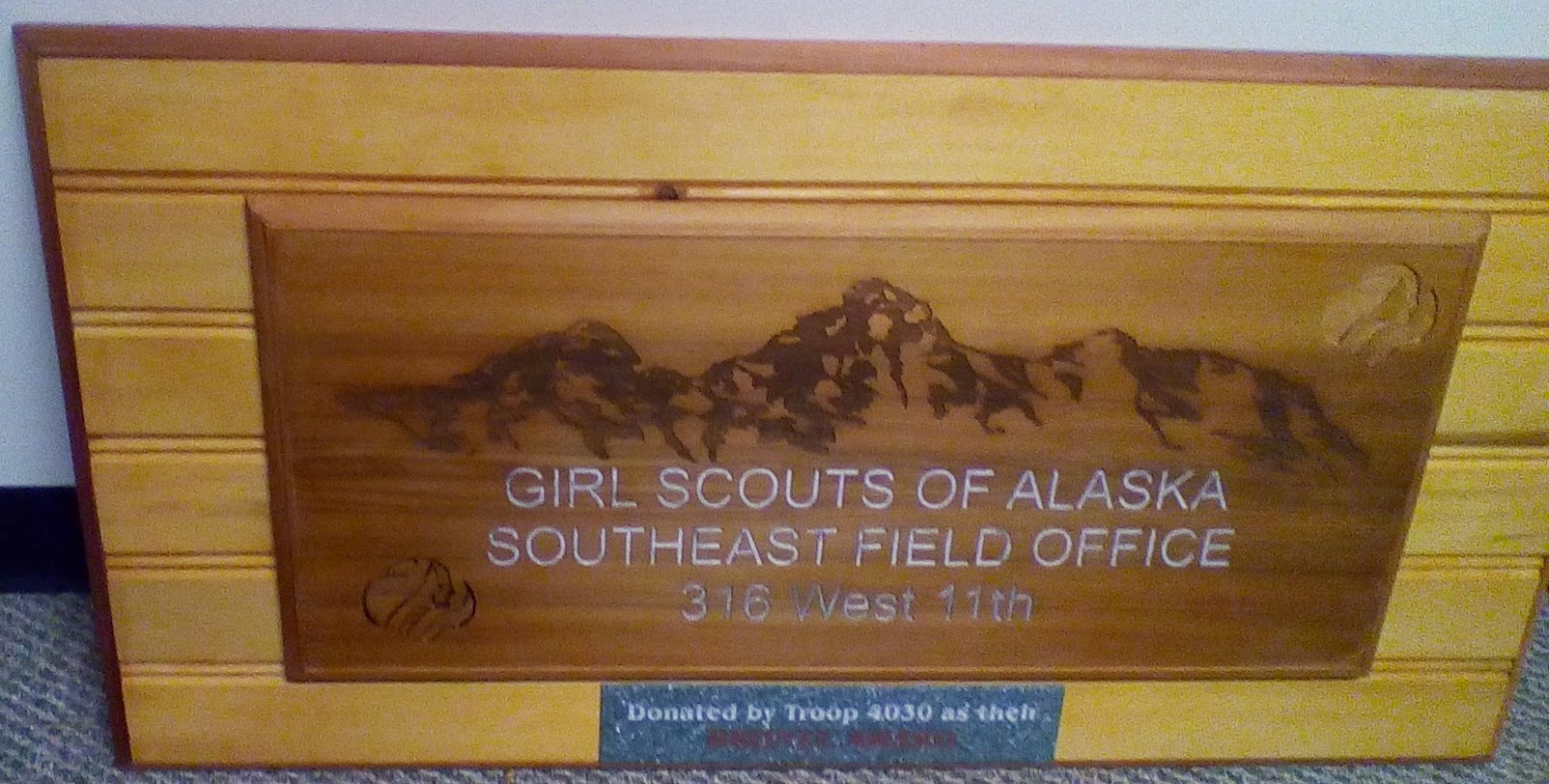 Saturday commenced with a meeting of our board of directors and ended with the auction. “The Southeast Auction is a fun and exciting event that supports Girl Scouting in Southeast Alaska,” said Mary Siroky, GSAK board president and Southeast Auction committee member. "Our Auction Committee works tirelessly to put together an event that will enable us to provide the Girl Scout program to every girl who wants to be a Girl Scout. We are grateful to our auction item donors, our volunteers, and all the generous attendees for making the auction happen year after year." 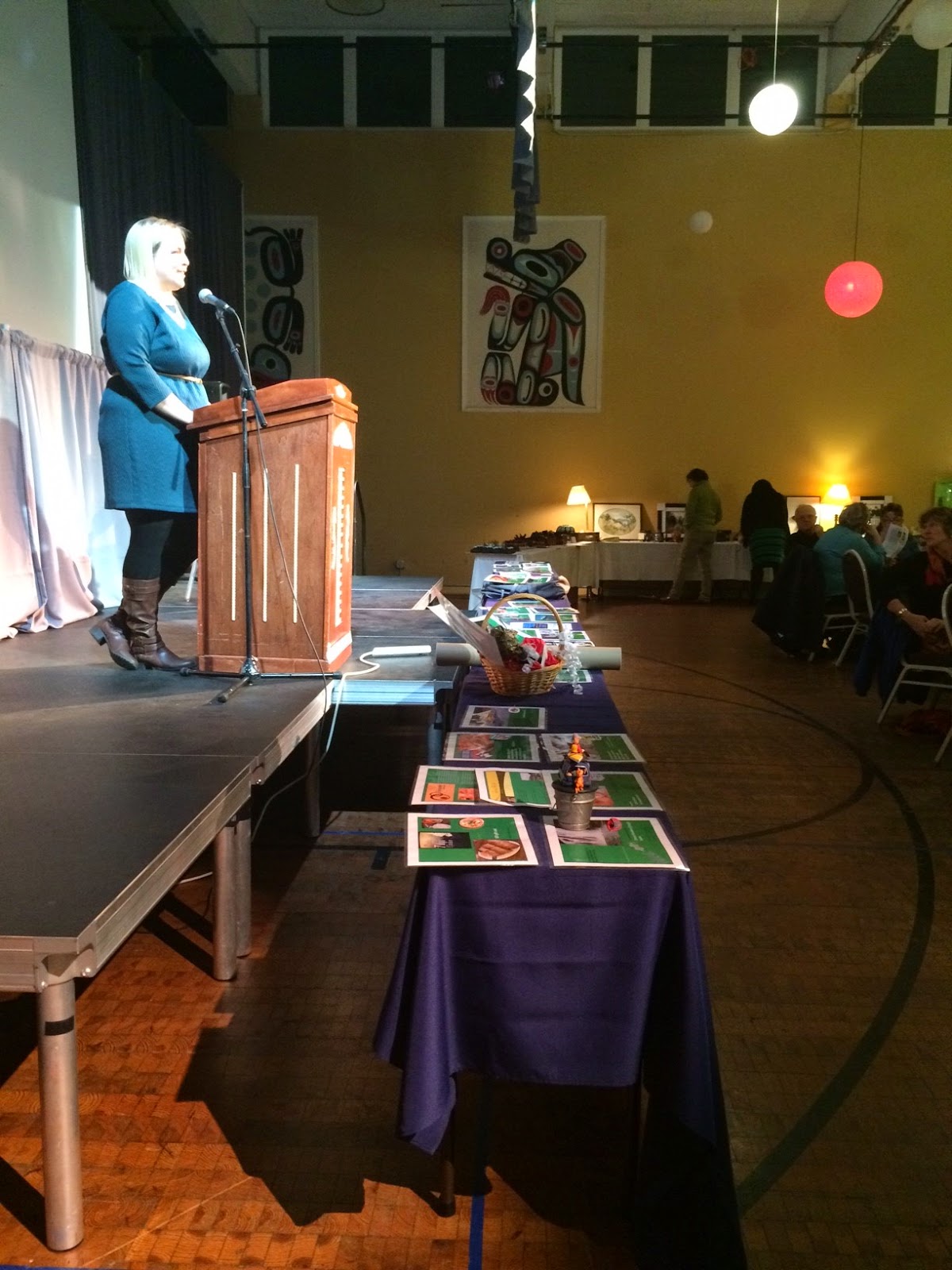 GSAK offers a variety of programs to girls in Southeast Alaska, including: