There are many Pathways to becoming a Girl Scout. Girls can participate in a series, such as an all-girl LEGO robotics team; attend an event, such as ice skating, a volleyball clinic, or an overnight at the planetarium; or attend summer camp.

When most of us think of Girl Scouts, however, we think of troop membership. Girls in troops have the advantage of participating in a variety of activities, generally over a span of nine to 12 months. Girls in troops share so much as they attend Girl Scout events, go on trips, sell Girl Scout Cookies, earn badges, and volunteer in their communities. 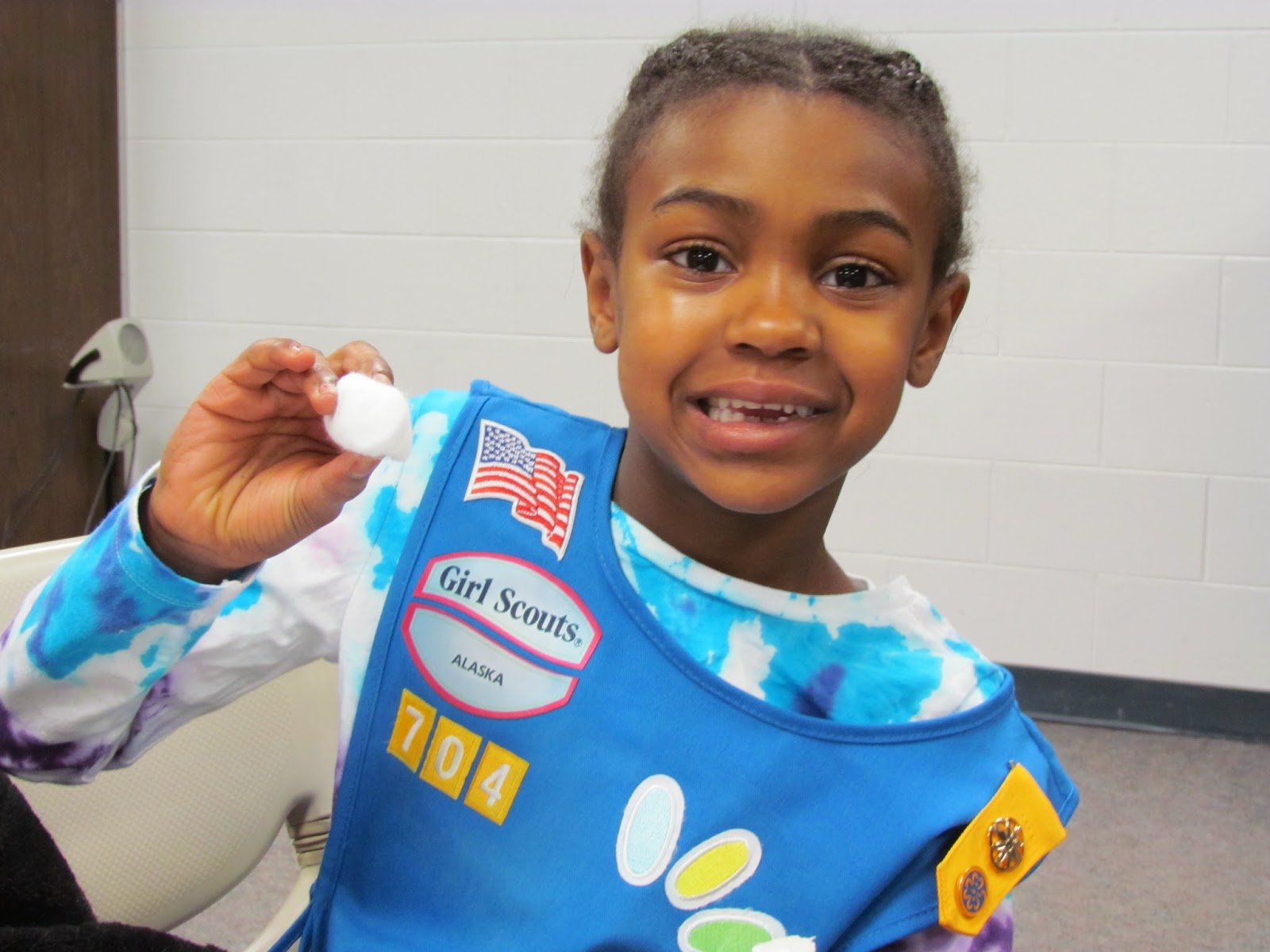 Troops are formed by adult volunteers. A Girl Scout troop consists of at least two non-related adult volunteer troop leaders and at least five girls of the same age and grade level. Troops meet together regularly, usually for the duration of the school year.

Troops provide an opportunity for girls to learn the Girl Scout "Keys to Leadership" of Discover, Connect, and Take Action:


“Any girl in grades K-12 can join a Girl Scout troop,” GSAK Director of Program & Membership Tasha Nichols said. “Girls join for fun and friendship, but they also learn about building character and self-esteem and serving their communities—the core qualities of Girl Scouting. In partnership with committed adult troop leaders, girls develop qualities that will serve them all their lives, like strong values, social conscience, and conviction about their own potential and self-worth.” 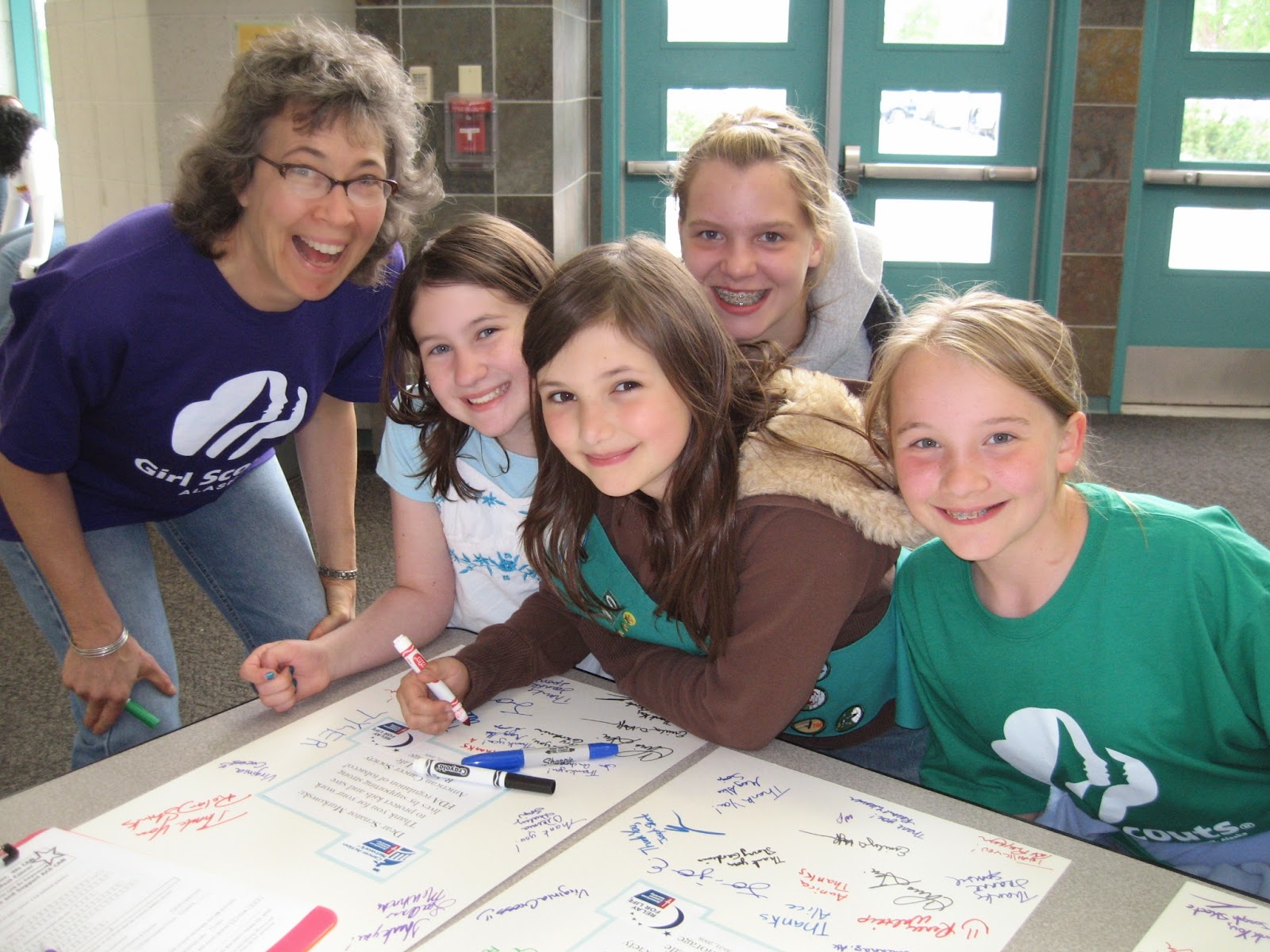 Cat Bras (pronounced “brass") of Soldotna leads a troop of girls in grades K-5. The start of the 2014-2015 academic year will mark Cat’s fourth year as a troop leader. A former Marine, she got involved when her daughter, Gracie, joined a troop as a kindergarten Daisy.

“I love being a troop leader,” Cat said. “And I get such awesome feedback from parents – their daughters love Girl Scouts!”

Recent past troop events include an overnight stay at the Alaska SeaLife Center in Seward, a hotel sleepover, and a hike in the Kenai National Wildlife Refuge. In keeping with her military roots, Cat’s troop participates in the U.S. Marines “Toys for Tots” program and the American Red Cross “Holiday Mail for Heroes” program.

A love of travel has been a driving force behind Anita Smyke’s dedication to Girl Scouts. Anita became a troop leader when her now 21-year-old daughter, Jessica, joined Girl Scouts as a kindergartner.

Anita’s troops have visited three of the four Girl Scout World Centers – Our Cabana, Mexico, in 2006; and Our Chalet, Switzerland, and Pax Lodge, England, in 2010. Her Ambassador troop will visit the fourth World Center, Sangam in India, this winter.

“Girl Scouts teaches girls how to work together and see the good in one another, and travel keeps the girls motivated and focused,” Anita said. “We travel for fun, but there’s always a community-service aspect to our trips. When we went to Mexico, we spent two days helping in an orphanage and worked on a Habitat for Humanity project. When we go to India, we’ll participate in the Gifts for Change program. My hope is to teach the girls not to take things for granted and help them develop a global perspective.”

Girl Scouting builds girls of courage, confidence, and character who make the world a better place. If your daughter in interested in joining a troop for learning, relationship-building, and fun, contact the Member Services & Program Specialist for your area: