Alaskan seniors are lending their time, talents, skills and expertise to Girl Scouts of Alaska.

Seniors play an integral role in helping non-profit organizations such as GSAK fulfill their missions. According to data released this year by the Corporation for National and Community Service, senior volunteering is at a 10-year high – one in three volunteers is a senior age 55 and older. These men and women tap a lifetime of experience to help a variety of faith-based, social service, health, educational and civic organizations.

“Volunteers are an important part of the Girl Scout Leadership Experience,” GSAK CEO Sue Perles said. “Adult volunteers act as cheerleaders, guides and mentors for girls, helping them develop skills and confidence. Our senior volunteers are especially valued because they can share the skills and talents they’ve developed over a lifetime with our girls, helping shape tomorrow’s leaders.”

Leading a troop is one way to participate. GSAK senior volunteers also coach LEGO robotics teams, present at Women of Science workshops, lend administrative support in our council office, and help out at summer camps. 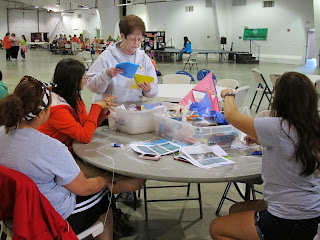 A volunteer leads a kite-making activity

For 44 years, Anchorage resident Judy Weimer has volunteered with Girl Scouts. A retired elementary-school teacher, Weimer currently leads three troops and serves as treasurer of her Service Team. Service Units are neighborhoods or regions comprised of troops and managed by Service Team volunteers.

“Working as a troop leader, I see the difference Girl Scouts makes in the lives of girls. The younger girls learn the basics of being a good, moral human being, and the older girls learn to give back to their community and why it’s important. Girls of all ages learn leadership skills, which makes them stronger people and capable of doing things they may not have tried otherwise. I’ve seen shy girls develop the confidence to organize and lead an event for 400 people. Girl Scouts gives girls opportunities they simply don’t get elsewhere,” Judy said.

Combining her love of travel with her passion for volunteering has taken Girl Scout troop leader Kim Ballard to Japan and Ireland, with a European excursion planned for 2016. Ballard was a Girl Scout herself, having achieved the organization's highest achievement. (The highest achievement is currently called the Girl Scout Gold Award, but it has been known in the past as the Golden Eaglet, Curved Bar, and First Class.)

“I always say, ‘Once a Girl Scout, always a Girl Scout,’” Kim said. “Unlike many people my age I still work full time, but I volunteer with Girl Scouts because the organization’s values are ones I want to perpetuate. I think it’s very important for girls to have something that builds their self-esteem. The activities we do as a troop, the girls take it one step further. They’re so enthusiastic. That’s what I love about the organization.”

In November 11-year-old Sarah Mixsell, a member of one of Kim’s three Girl Scout troops, received the "Outstanding Youth in Philanthropy" award from the Association of Fundraising Professionals, Alaska Chapter, for her Alaska Kids for Kids charity. Sarah thanked Kim during her acceptance speech.

Kim herself was recently appointed to by the World Foundation for Girl Guides and Girl Scouts, Inc., to serve a three-year term on the Friends of Our Chalet Committee of the World Foundation. Our Chalet, located in Adelboden, Switzerland, is one of four Girl Scout world centers. The other three are in located in Hampstead Village, England, Cuernavaca, Mexico, and Pune, India.

Darryl Royce, director of community outreach for AARP Alaska, said senior volunteerism was a driving force behind the creation of AARP. “Our founder, Ethel Percy Andrus, had a motto: ‘To sere, not be served.’ Volunteerism was a founding tenant of our organization. The thing I try to drive home to seniors is that their experience is relevant. No matter your age, you can use your life experiences, skills, and passions in your community today.” 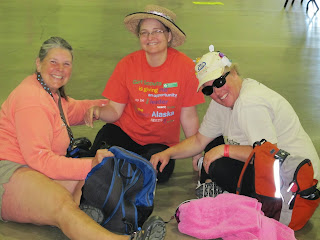 Ola Williams has helped manage the Girl Scout Cookie Program for the Mat-Su Valley for 13 years. She was never a Girl Scout herself and did not have daughters in the program, but she started managing her best friend's daughter's troop in the late 1970s in upstate New York. Ola became involved with the Cookie Program as a troop leader, and later served as cookie depot manager in Ithaca, N.Y. When Ola moved to Alaska in 1999, she knew she wanted maintain her involvement with the program.

"The Girl Scout Cookie Program is such a worthwhile program for the girls. I own my own business and in the spring I pretty much schedule my time at work around the cookie sale. For myself, not having kids of my own, it's a way to keep in contact with younger people. I've touched hundreds of girls’ lives because of my involvement with the program. Girls will stop me in the grocery store and say, 'You’re the cookie lady!'”

With the help of more than 1,500 adult volunteers, Girl Scouts of Alaska serves nearly 6,000 girls in communities from Bethel to Ketchikan. To volunteer, contact the member service specialist in your area: