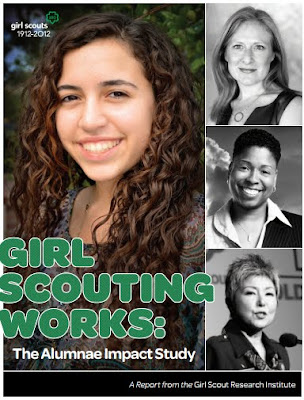 It's true...Girl Scouting works! All of us in the Girl Scout family are already well aware of the value and benefits we've received as girls, and as adults, in Girl Scouting. Now we have proof for everyone else.

According to the latest Girl Scout Research Institute report Girl Scouting Works: The Alumnae Impact Study, women who were Girl Scouts as youth volunteer more, vote more, have a higher education level, rate their satisfaction with life higher, and even get paid more than those who weren't Girl Scouts.

Almost one-quarter of the United States population has been directly touched by Girl Scouts. Approximately one in every two adult women (49%) in the U.S. has at some point been a member of Girl Scouts, with the average length of time spent in Girl Scouts four years.

Girl Scouts makes our country stronger, and we make Alaska stronger, by building girls of courage, confidence, and character who make the world a better place...who grow up to be women who make a difference.

How long a girl is in Girl Scouts does have an effect on life outcomes. But even women who were only Girl Scouts 1-2 years have higher volunteer and community engagement rates than non-alumnae. That's great news, since taking action to make the world a better place is central to the mission of Girl Scouting, which is predicated on valuing oneself and others.
Women who are longer-term alumnae display a stronger sense of self: 71 percent consider themselves capable and competent, compared to 55 percent of shorter-term alumnae. In addition, 62 percent of longer-term Girl Scout alumnae think of themselves as leaders while 52 percent of short-term alumnae think of themselves as leaders.
We already know that more than two-thirds of women business owners and CEO's, and U.S. senators and congresswomen, were Girl Scouts.

But two-thirds of too few is not enough, which is why in its 100th anniversary year, Girl Scouts of the USA has affirmed its unwavering commitment to girls’ leadership with the launch of ToGetHer There. This multi-year effort will seek to create balanced leadership—the equal representation of women and men in leadership positions in all sectors and levels of society—within one generation.
Girl Scouts is uniquely positioned to help millions of highly qualified young women launch and sustain careers, overcome barriers that confront them, enter the ranks of senior leadership, and thrive there. Our goal is for Girl Scouts to be the catalyst for the gender-balanced leadership that this country needs.


One kind of support we know girls need is role models—successful older women they can learn from and emulate. There is no group of women better suited to do that than our Girl Scout alumnae.


Are you a Girl Scout alumnae? Would you be willing to talk to girls who want to be leaders but may not be sure how to go about it?  If so, there are many ways you can help.  Become a Girl Scout leader, volunteer to present at a Women of Science event, or just give a one-time talk about the work you do and how you got where you are. Please join our alumnae association, and contact our office to let us know how you might like to help.  http://alumnae.girlscouts.org/